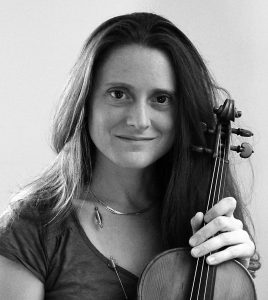 Ros Stephen is a composer, violinist and violist  based in East London. She has a first class degree and PhD from Bristol University. Her compositions have been published by Oxford University Press, Schott Music Ltd, and the Associated Board of the Royal Schools of Music, performed in West End theatre, and broadcast on BBC Radio 3. Her music is influenced by classical and world music, mixing live instrumentation with contemporary soundscapes. As a violinist she has performed in London’s West End, on BBC television and radio, played for film, tv and pop recording sessions, and worked with a wide variety of orchestras, chamber ensembles, and jazz and world music groups. Recent work has included recording and arranging strings for Robert Wyatt, Imogen Heap, David Gilmour and Phil Manzanera, amongst others. She also recently played solo violin on Clint Mansell’s soundtrack for ‘Loving Vincent’, recorded at Air Studios, and solo violin on Barnaby Taylor’s soundtrack for Disney Nature’s ‘Born in China’, recorded in Abbey Road.

Here is a selection of my recent tango compositions. These pieces were all recorded in my home studio in East London. If you would like to hear more of my music please visit www.ros-stephen.com/audio